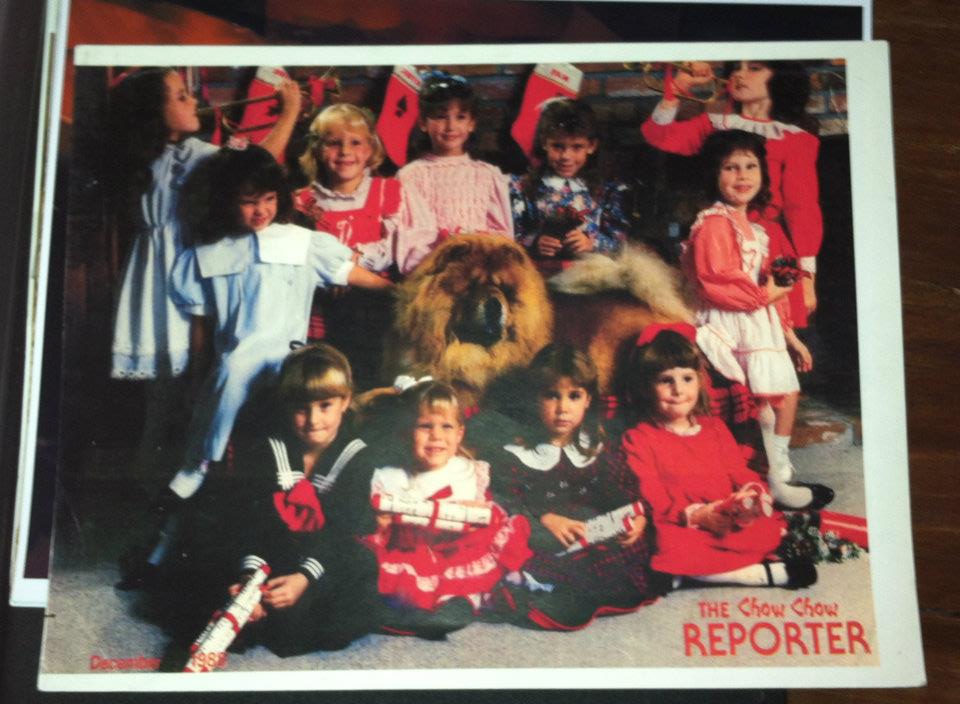 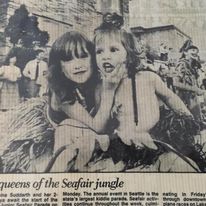 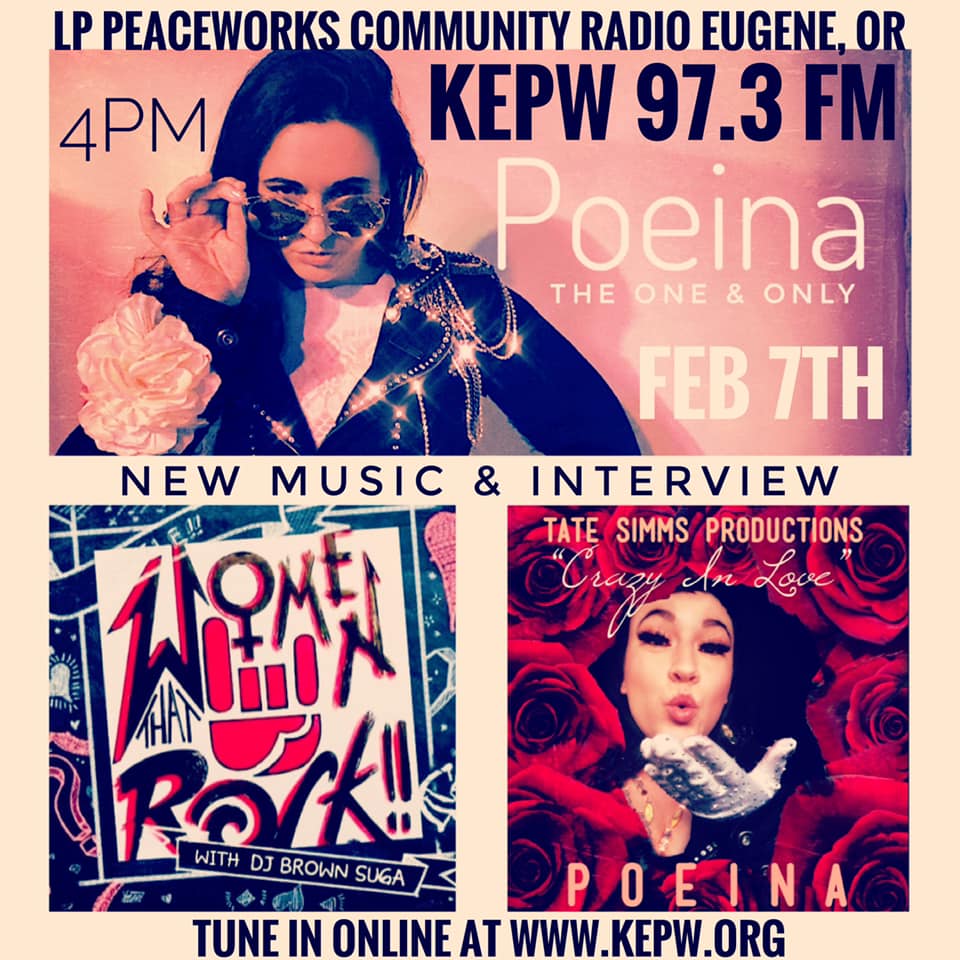 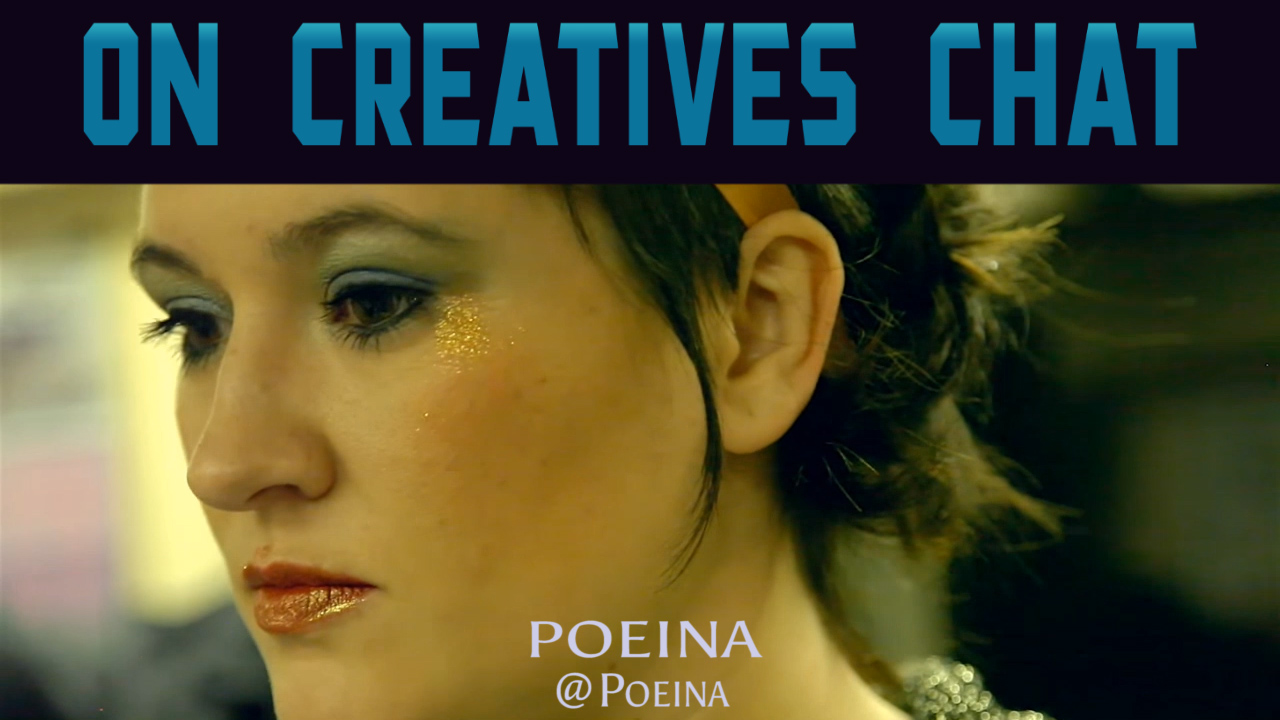 This week we chat with Poeina, a self-proclaimed Gypsy who has literally traveled all over the world spreading love through her music and videos. She recently hosted the benefit show to raise funds to help a business in her community keep operating: www.RaiseTheCakes.com

We’re going to chat about her experiences as a street musician and how she persevered to become the powerhouse she is today.

“It hasn’t been a simple journey, especially after several of his former band members, Jackie Von Rueden, Poeina Suddarth, and Margot Lane, made public accusations against him. While Corey Feldman was working to expose Hollywood pedophiles, three of his former band members began working together to say that Corey Feldman was the real abuser,  Corey Feldman set rules for his band members and consorting with Marilyn Manson was certainly off of the list. Corey has clarified that he is against Satanism, dark arts, the occult, and frequently speaks of God. Now, Jackie Von Rueden, who lived in his home, and Poeina Suddarth, his former costume designer, were spending time with Marilyn Manson!” 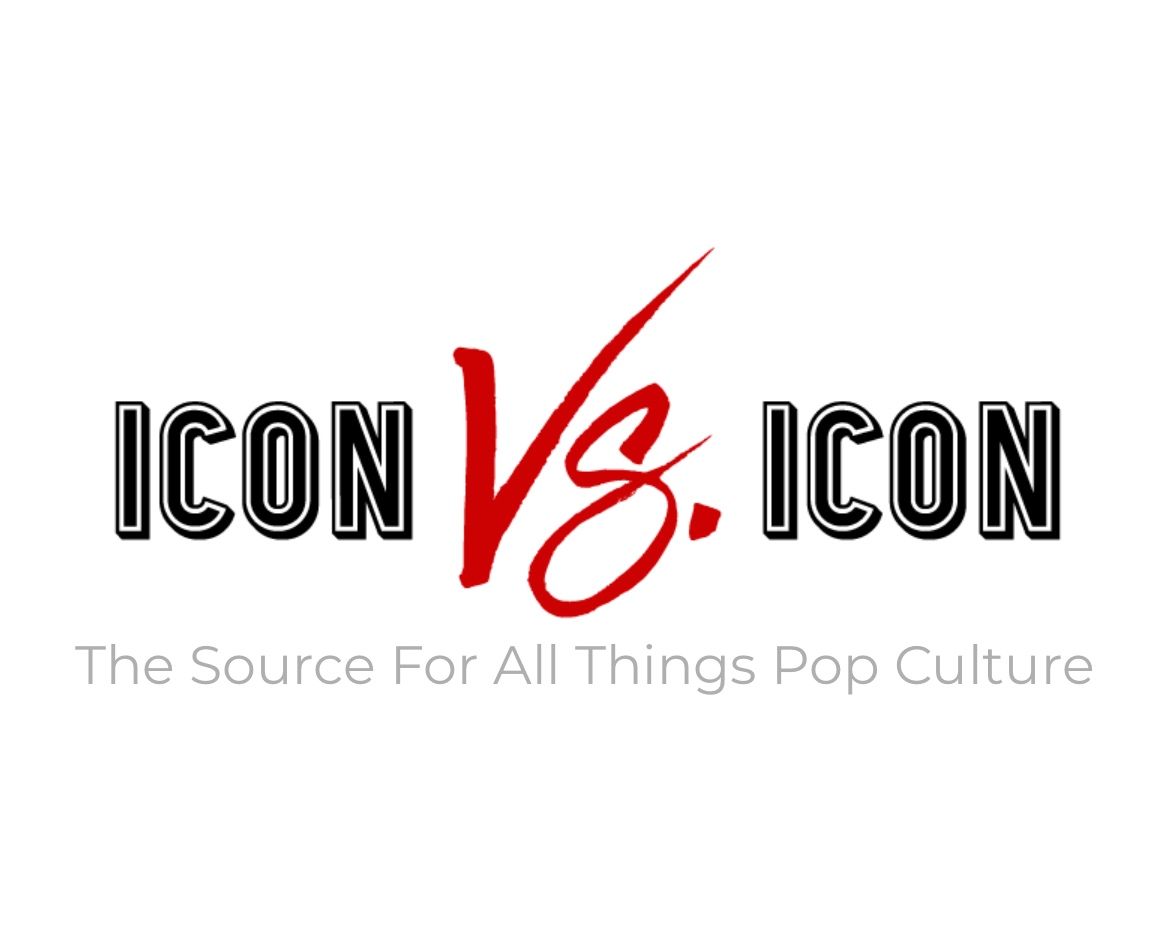 "The Importance Of Following your Dreams: Corey Feldman's Angelic to The U.S. Tour" by Dylan Lyles

To our surprise we were joined by Poeina, the costume designer for Feldman and his Angels.  She stated that they were taking a little bit longer getting ready so she was here to play a few songs.  Understandably we were a bit annoyed but she shut us up real quick.This girl has pipes! I will not be surprised when she’s popping up on the radio shutting it down!

“[GYPSY ROCK] A ramblin’ rambler of sorts, Poeina Suddarth has managed to stay her musical course via successful Kickstarter campaigns and the willingness to hitchhike and utilize public transportation while touring. The Janis Joplin-inspired Suddarth draws from a well of 30 musicians otherwise known as the Lucid Dreamers, making her touring act dense and delightfully unpredictable. Her sound is an operatic form of indie-folk, something akin to Y La Bamba’s Luz Elena set on a makeshift rural stage circa the late 19th century. This will be a homecoming of sorts, as it’s Poeina’s first show in roughly three years”

“Gasoline”, which has been getting some radio play. The track showcases Suddarth’s powerfully defiant vocals against a spooky mix of banjo and mandolin. The mando and banjo return for the gentle “White Mt. Beauty,” a charming mix of folk, gospel and bluegrass sounds that lets us enjoy the softer side of Suddarth’s raspy but engaging voice. That rasp gives songs like the bluesy “Electric Land” an earthy authenticity. “Coral Reef” is the most dynamic track as it shows off the power and range of Suddarth’s vocals, especially as she sings in an operatic Latin style that morphs into impassioned aggression. To truly appreciate this song, though, you have to see Suddarth perform it live — ideally when she’s wearing a bright pink dress and trotting around a campfire in Cedar Canyon. It’s a sight to behold.” 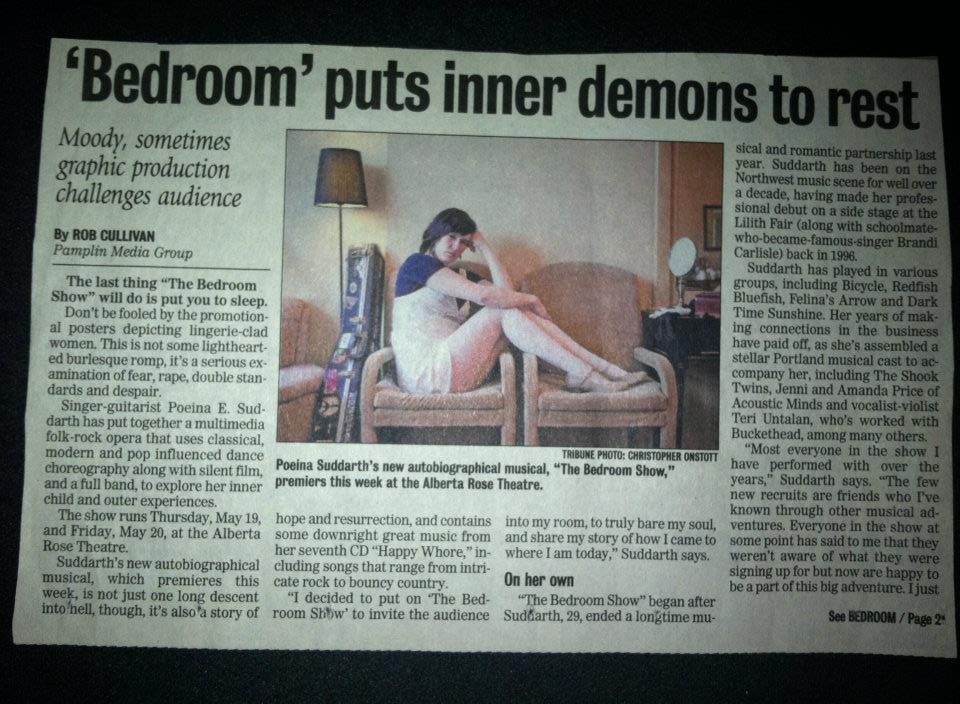 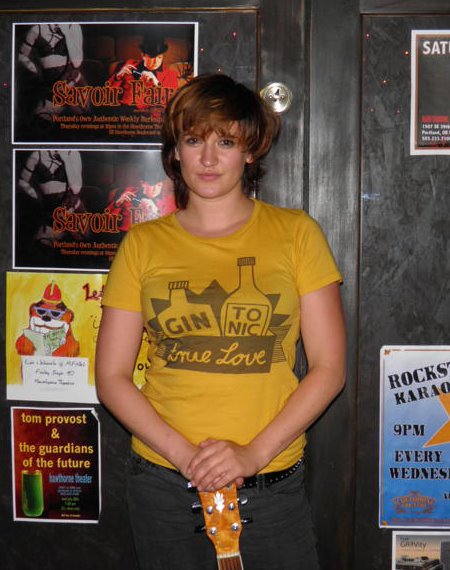 …one performance stood out above the rest, she mesmerized the audience with her emotional set which was both passionate and at times painful…a young man gave up his barstool, moved to the front of the room and sat entranced on the floor in front of the stage and said “this is one of the sexiest songs i’ve ever heard”, her performance was visceral…” 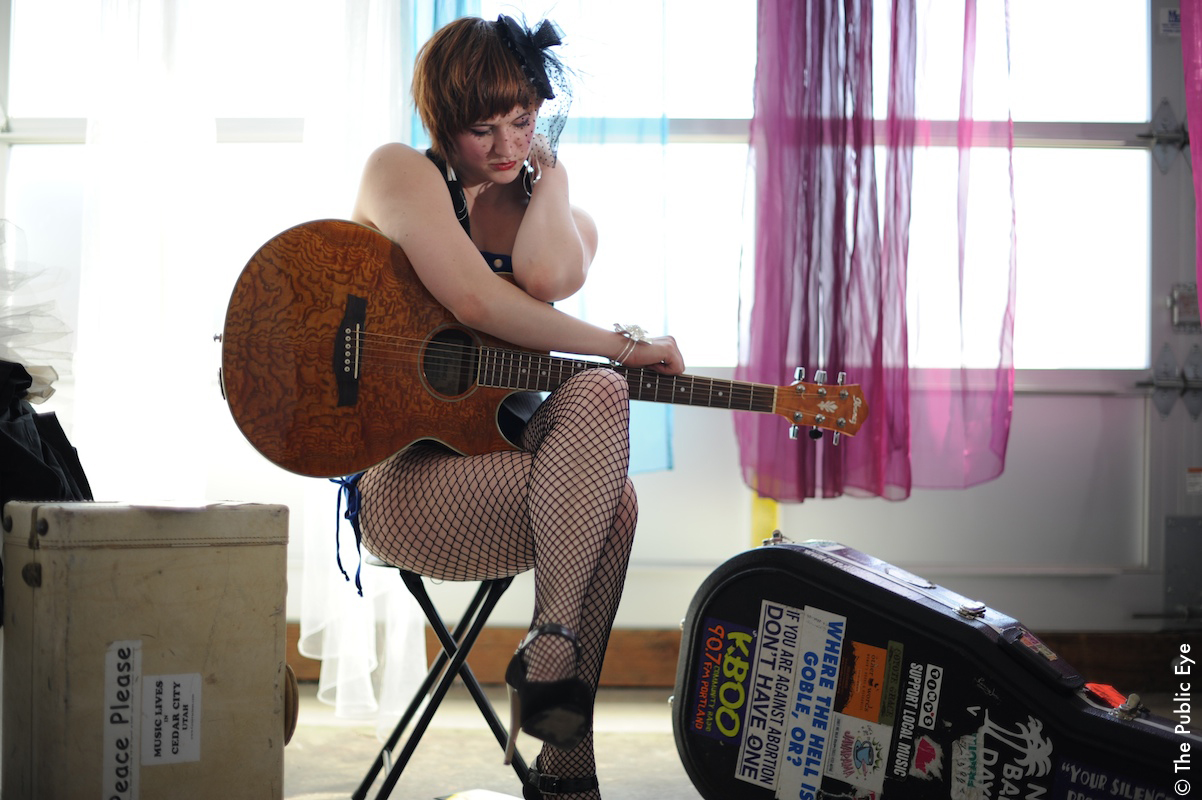 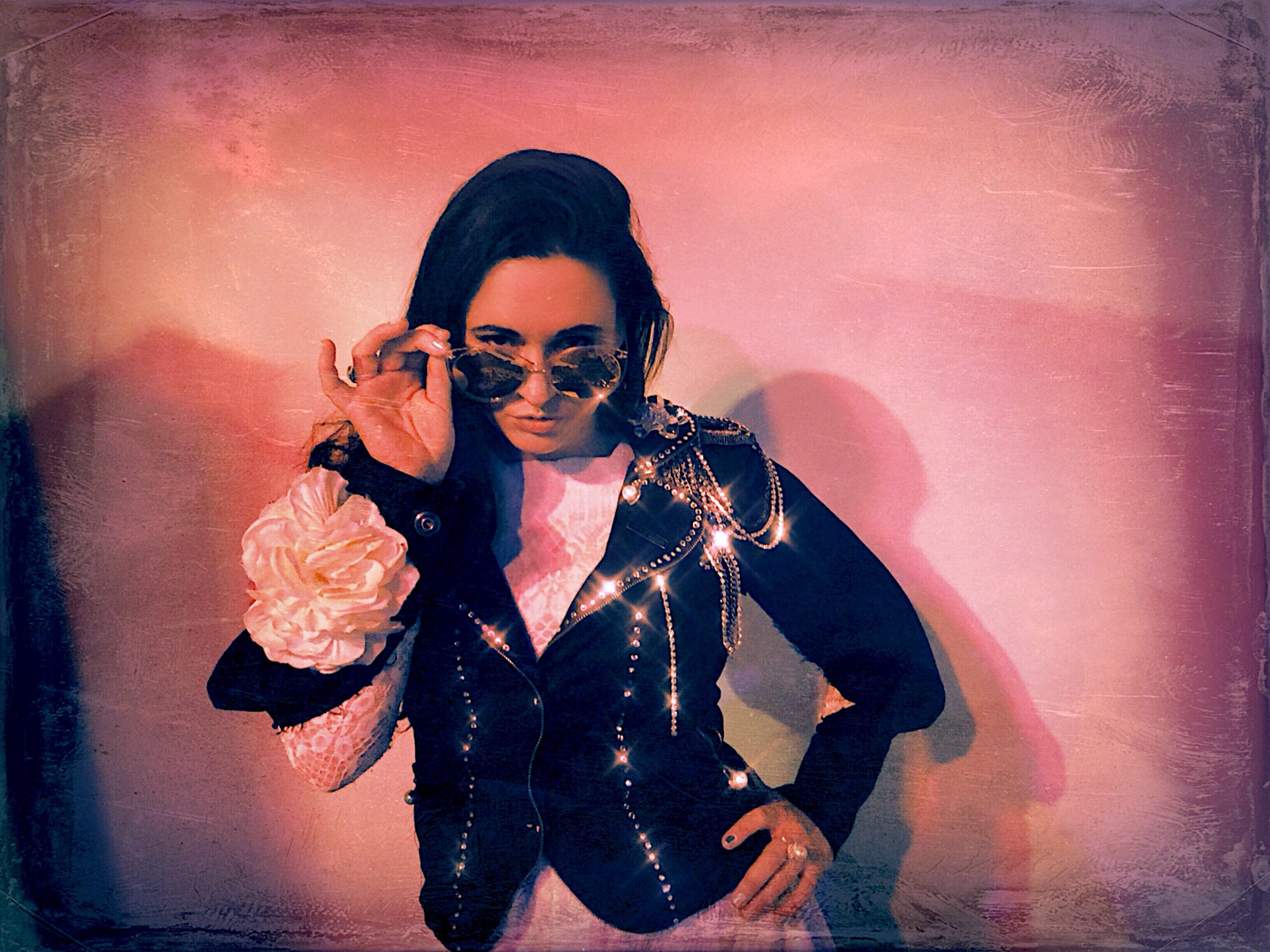 "The Importance Of Following your Dreams: Corey Feldman's Angelic to The U.S. Tour" Asheville Music, by Caleb Calhoun

“I’m taken off guard from the minute I walk into the Grey Eagle to see Corey Feldman and The Angels. It’s 9:28 and Feldman isn’t slated to be on stage for another hour. Poeina, the first musician to grace the stage, is performing some rare brand of folk opera that I can barely even wrap my head around.” 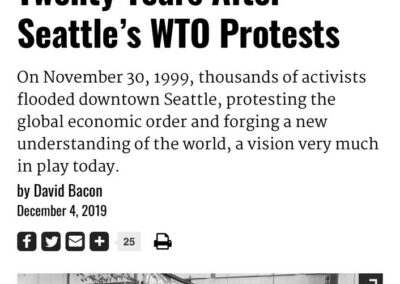 The Progressive by David Bacon 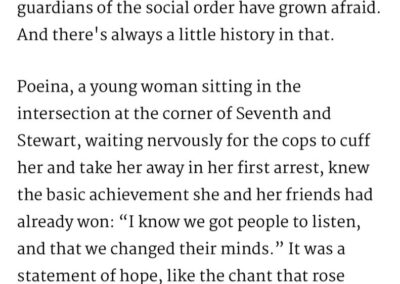 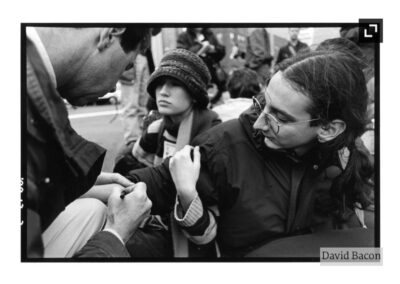 Young Poeina at the WTO protests

“She may have only lived in Cedar City for about nine months as a teenager, but that should qualify Poeina Suddarth as at least somewhat local.

The Los Angeles-based singer later returned to Southern Utah while touring with her band Felina’s Arrow. Most recently, she played two slots at this year’s Groovefest, headlining the June 26 Campfire Concert in the Canyon then playing the second stage on June 30 at Cedar City’s Main Street Park.

Both sets featured music from her latest album, “Happy Whore,” including her hard-hitting single “Gasoline,” which has been getting some radio play. The track showcases Suddarth’s powerfully defiant vocals against a spooky mix of banjo and mandolin.

The mando and banjo return for the gentle “White Mt. Beauty,” a charming mix of folk, gospel and bluegrass sounds that lets us enjoy the softer side of Suddarth’s raspy but engaging voice. That rasp gives songs like the bluesy “Electric Land” an earthy authenticity.

“Coral Reef” is the most dynamic track as it shows off the power and range of Suddarth’s vocals, especially as she sings in an operatic Latin style that morphs into impassioned aggression. To truly appreciate this song, though, you have to see Suddarth perform it live — ideally when she’s wearing a bright pink dress and trotting around a campfire in Cedar Canyon. It’s a sight to behold.”

“Poeina Suddarth, whose rocking style was evident not only in her music and “stage” presence, but also her brilliantly pink dress.”

“Poeina has been crafting her talent on stages across the US and has performed with many talented and notable musicians over the last fifteen years. Poeina is teaming up with unison music as tour manager for the for the label’s new act the baron sisters. With her experience on the road she will not only be the tour manager but performing as the opener for the positive thinker tour July 2012. Poeina will bring along her newly released solo album titled “happy whore”.”

Poeina Suddarth: “Strange Is Pretty Normal to Me at This Point”

“Suddarth puts her guitar and assorted effects to good use in her wandering brand of old-time Americana-flavored, indie rock-infused, otherworldly pop. That’s a lot of hyphens, but Suddarth’s music is hard to define. Rich and atmospheric, haunting and raw, songs are fleshed out with unexpected (and understated) instrumental flourishes from reckless percussion, clawing banjos, jittery mandolins, floating violins and, occasionally, full-string sections. Her evocative, emotive vocals float on top–another layer providing gritty depth.”

It’s harder to play guitar when your digits are cold. But singer/songwriter Poeina Suddarth soldiers through in this edition of Chuck Johnson’s Humboldt Live Sessions. She and Yogoman Burning Band trumpeter Thomas Deakin made their way up Horse Mountain for a performance of the song “White Mountain Beauty.”

“Touring for any musician can be a difficult challenge. That challenge is multiplied for singer-songwriter Poeina Suddarth. Currently on her Trains, Planes and Automobiles tour supporting Poeina, she relies on the ridesharing kindness of fans, strangers and truckers to get her from gig to gig since her van broke down almost a year ago. She doesn’t always make it, but hitching about the country can only add inspiration to her wandering brand of old-tyme Americana-flavored, indie rock-infused, twangy-otherworldly-pop. Suddarth took a few minutes out of her busy performing and busier travel schedule to discuss via email her travel difficulties, missed gigs, upcoming music projects, and her fascination with all-things music — from country to horrid sounds “not even a mother could love.””

“Also performing at the Nail Creek was Los Angeles based Poeina Suddarth. An energy radiated from her as she prepared to take the stage. Her warm welcoming smile and playful attire put the audience at ease immediately. When she began to sing, her sultry, strong voice mesmerized and captivated those listening.”

“Love in all its facets she has lived and suffered from “What is love?” to “Will it ever really change?” to answer “Love is Blindness he went on”. But also of the “Burning Bush in Georgia” was raised. Easily accessible from the whole of Europe was also the musical accompaniment, not always, but in any case presented perfect and interesting. The audience demanded an encore and not only did they get it, but also compliments from the musicians.”

“…the American with the large voice gained a considerable audience.. by the diversity of high Emotionality, coupled with a subtle “Rotzigkeit” plug in.” 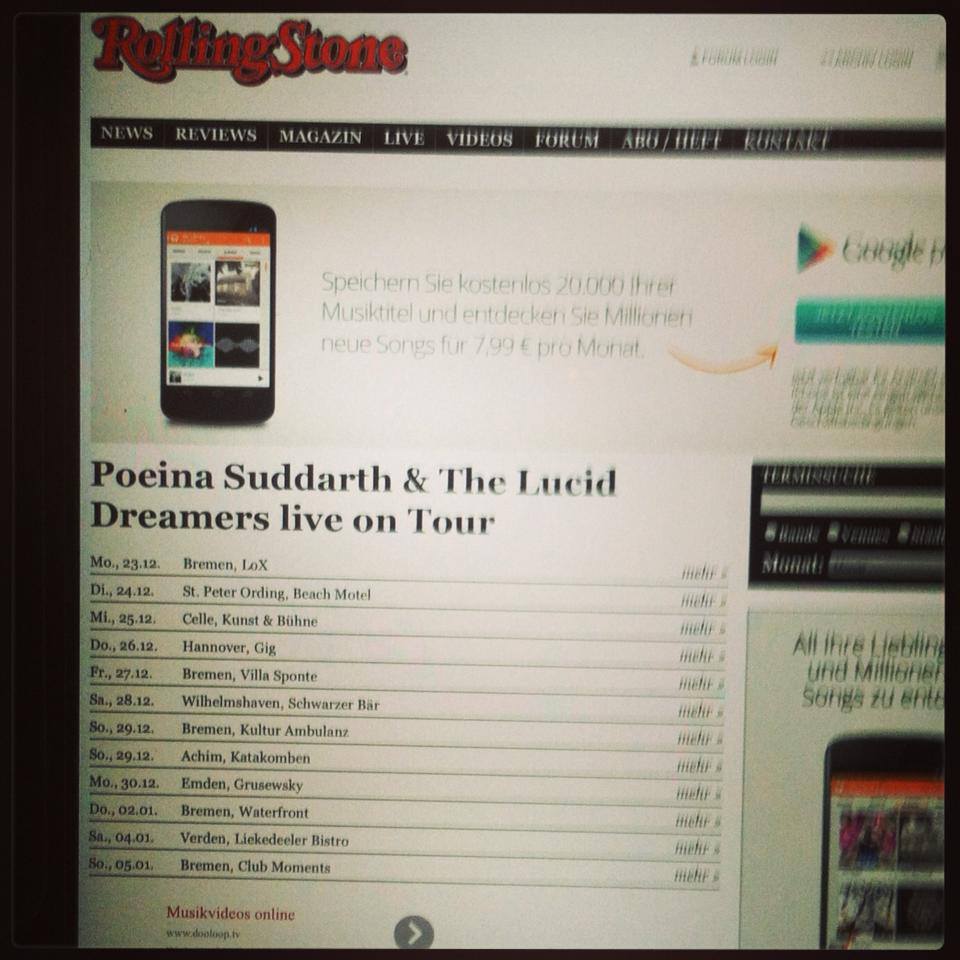 “Happy Whore is a phenomenal, phenomenal cd. It should be in everybody’s collection. You should listen to it often. It’s beautiful.  Poeina has a beautiful beautiful voice and a beautiful soul.”

“Poeina Suddarth = Honey Honey + Amy Winehouse + Janis Joplin Poeina Suddarth’s vocal range is insane. Her sharp-yet-sweet voice travels everywhere from upbeat skit-skat jazz on “Natural Disaster,” all the way to relaxed grass-plains country sounds on “Gasoline” and “White Mr. Beauty.” In many instances, her voice sounds a lot like Hayley Williams of Paramore, though she masterfully dives into spaces Williams wouldn’t dare go. The real lobe-lasher is “Coral Reef,” where Suddarth squeals out high-pitched operatic vocals over rich acoustic cross-picking—I’m still pulling glass shards from my ears, but it hurts good. Tracks like “A Man Like Me” and “Hey Sister” are dressed in a lightly grim, heart-aching atmosphere (call her Edgar Allen Poeina) that adds excellent dynamic tension. Overall, Suddarth has cultivated an intriguing vibe with a little bit of everything; it’s lustrous, eclectic, and damn sexy. If Poeina Suddarth is a happy whore, I’m a happy client”

I remember Poeina’s first performace I saw.  I had one of those holy shit moments because I was like WOW where’s this girl been all this time.”

< for full interview click the video to the left.  Interview starts at 32 minutes>

“One day on a train from Portland, Oregon to Sacramento, CA I heard live music from the other end of the Observation Car. There was an energetic woman with a guitar, strumming, singing from her gut, and giving a concert to two other passengers. Turns out I was sharing the train with none other than Poeina Suddarth, an awesome singer/songwriter from LA on tour. She is well known in the Portland music scene and have appear at Pride there and on KBOO’s Out Loud program. She told me she even gave voice lessons to one of my favorite singers, Joe Stevens.”

“The one and only Poeina has been bedazzling the Redballs diners with eclectic music every Monday night. Eclectic generally means “weird” but it’s “good weird” for Poeina.”

“It was crazy. I’ve felt the magic that occurs when people make music together, because they need to. Not because they are going after three successful albums and a number one hit as part of their record contract again for promotional purposes on tour…Because I have watched this woman open her mouth, as she screamed her soul into the room, It gave me the feeling that if you really want it, just about anything can be possible.”